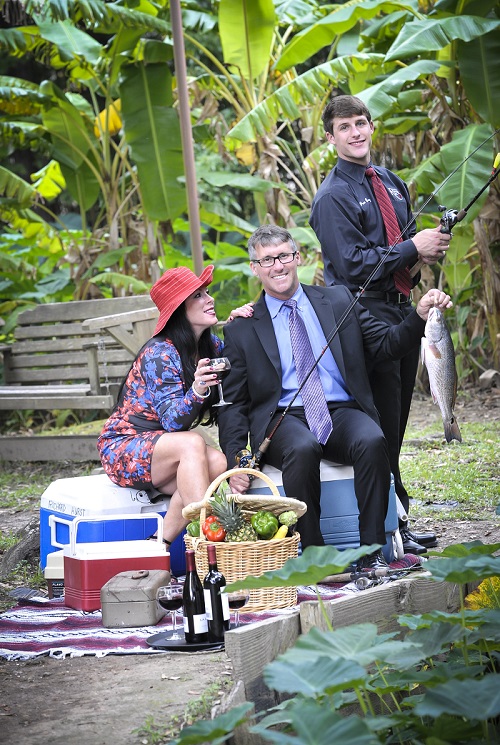 Richard Hurst is taking on his grandfather’s legacy one “snowball” at a time.  Starting with his grandfather and a snowball stand in 1932 and the history that comes with four generations in Lafayette until today, Richard is back at the helm of Poor Boy’s Riverside Inn.  Richard and Lori plan to focus on the original and make it shine bright, putting 2nd, 3rd and 4th generations back under one roof! Once with two full-service restaurants, one in Lafayette since 1932, and one in New Iberia for 32 years, the Hurst  family  has  prospered  in  the  Acadiana  area.  The  beginning -a  hand-pushed  snowball  wagon  and  $1.30 investment  in  sugar  and  flavoring  in  the  middle  of  the  Depression  with  an  enterprising  country  boy  from Youngsville named Hulo “Poor Boy” Landry, a family tradition was born. Originally a baker by trade from the Evangeline  Maid  bread  family,  Hulo  developed  an  allergy  to  flour  and  by  necessity  became  an  entrepreneur. From snowballs to hamburgers to famed “Poor Boy” sandwiches, Hulo’s business expanded and prospered.  With input from his wife, Eugenia, relatives and friends, the menu grew to include seafood and steaks.  In 1939, he moved from  St.  John  Street  to  a  beautiful  site  overlooking  the  Vermilion  Bayou  at  Pinhook Bridge.  Then disaster struck.  Many believed that the devastating flood of 1940, which swamped the restaurant, ruining building and equipment, would mean the end of “Poor Boy’s”, but three months later found Hulo Landry back in business.    In  1946, he opened  the  first  completely  air-conditioned  restaurant  in  Lafayette  and  enjoyed continuous success until his death in 1958. Still, Poor Boy’s Riverside Inn endured.  Upon  his  death  in 1958,  his  son-in-law  and  only  daughter,  Larry  and  Kathlyn  Hurst,  took  over  the management of Poor Boy’s Riverside Inn, and prospered on the same premise that brought success and respect from the community to Hulo -quality in food and perfection in service. In 1977, Poor Boy’s Riverside Inn moved to its present site where the Hursts began to groom two of their four  children  to  manage the  restaurant, though  every  family  member  has  worked  here  in some capacity.    In 1985, under  the  guidance  and  watchful  eye  of  their  parents,  Richard  and  Elaine took  over  the  operation  of  the restaurant.  They made an outstanding brother/sister team, and along with their loyal staff continued the family tradition of consistent quality in food and service.In    1988,  they  opened  their  second  restaurant,  Little  River  Inn.    They  took  over  the  Bayou  Bar  in  Bayou Landing  from  the  Patout  Family.    In  2000  when  Richard  moved  Little  River  to  its  new  location  on  Main  Street, Richard’s wife, Lori, joined the restaurant team.  The new location encompassed a little bit of history.  Originally  the  BF  Trappey  office  building,  it  overlooked  the  famous  Bernard  F  Trappey  Oak,  estimated  to  have  been planted in 1630.  Lori managed the front of the house there, while Richard supervised the kitchen. Fast forward to 2011, Elaine followed in the footsteps of her father, Larry, and retired early and Richard followed  in  the  footsteps  of  his  mother,  Kathlyn,  keeping  the  family  tradition  going  until  the  next  generation—grooming  son,  Christian,  in  front  of  house  operations  as  a  server,  kitchen  management,  and  also  in  the  office.  This also made the second time Richard has bought the restaurant in one form or another.  He and his wife, Lori, plan to live up to Hulo’s dream, and as a dynamic husband/wife team continue the Hurst family tradition. Hitting the fast forward button once again to 2020, Richard and Lori decide it is time to be back at the original, train more hands on, have three generations back under one roof—learning even more from the matriarch of  the  family,  restaurant  history  from  dad,  and  making  a  bittersweet  decision  to  get  back  to  one  location—the original “Poor Boy’s Riverside Inn”. Both locations have seen Acadiana grow and prosper, with many fond memories made in New Iberia—but with a new outlook, new energy and new plans to take Riverside to greater levels, more history is to be made.  If  windows  and  doors  could  talk,  what  tales  they  could  tell!    Birthday  celebrations,  business  deals, proposals,  reunions,  parties  of  all  kinds  have  taken  place  at    both  of  our  locations.    Couples  who  held  their wedding receptions here return again and again to celebrate their anniversaries with us.  Now, Richard and Lori are looking forward to more stories to fill the pages with—so stay tuned. The  Hursts  would  like  to  thank  you  for  the  opportunity  of  serving  you, and Richard  and  Lori  hope  that  in their food and service you find a bit of the love and intense pride that has gone into the creation of Poor Boy’s Riverside Inn!

Check out our podcast!   https://open.spotify.com/episode/26mzd8GL5fJIkfntapFioD?si=Uv4LFko4TxykSV9mOkPfGQ&nd=1